Originally described as Reynoutria japonica by Houttuyn in 1777 from Japan, that name was lost to botanists for over 150 years, in the mean time the same species was independently named Polygonum cuspidatum by Siebold and Zuccarini in 1845.

It was not until the 1901 that Makino, a Japanese botanist, realised that the Reynoutria japonica of Houttuyn and the Polygonum cuspidatum of Siebold and Zuccarini were the same Japanese Knotweed was introduced from Japan to the unsuspecting West by the horticultural activities of Philippe von Siebold via his nursery at Leiden (Holland) in the 1840s. It arrived at the Royal Botanical Gardens Kew in August 1850 in an unsolicited parcel of plants from the nursery of von Siebold of Leiden.

By 1854, the plant, under the pseudonym Polygonum sieboldii had arrived at the Royal Botanic Gardens in Edinburgh. The plants were then sold by a large number of commercial nursery gardens around the country (Bailey & Conolly 2000), the sharing of cuttings and the discarding of unwanted rhizomes established the primary pattern of distribution. Further vegetative spread followed naturally along watercourses, and artificially where soil containing rhizomes was moved above in road building and construction schemes.

All this information and more is in ‘Prize-Winners to Pariahs – a History of Japanese Knotweed s.l.(Polygonaceae) in the British Isles’. (Bailey, J.P. & Conolly, A.P.)

In Ireland it is also known as glúineach bhiorach in Irish and known as “Hudsons” on the Dingle Peninsula as it is believed to have been spread to the region from the garden of a Dr Hudson.

Nowadays Japanese knotweed is now very common and widely distributed across a variety of habitat types in Ireland. It is most prominent on roadsides, waste ground and in wetland habitats where it out competes native species and forms dense thickets. It is now very well established along river banks, roadsides and on waste ground throughout the county. 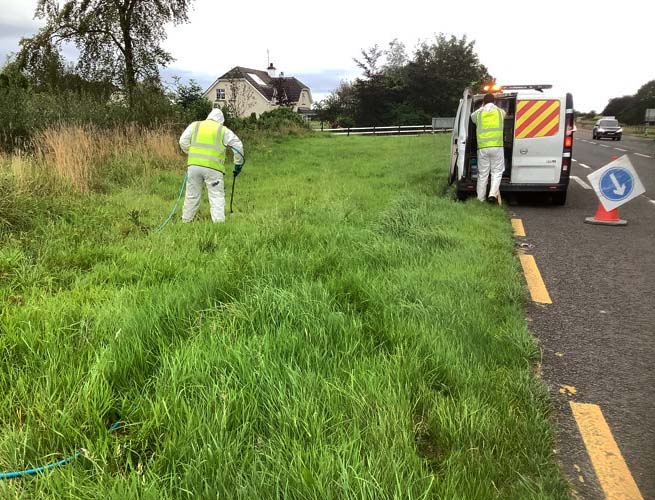